Welcome to the Press Reviews.

Some of the press reviews for where Brenda has been featured…

Adelman, now a Spiritualist Psychologist weaves her tragic/comic journey through her growing up years in Mill Basin section of Brooklyn the daughter a Jewish ‘Guido’ father and Bohemian artist mother, Barbara, who was intrigued with Shakespeare. Adelman takes on the persona of Mother, Father, Brother and assorted friends with ease and enthusiasm that easily draws us into her family drama without our even realizing it.

Her story traces her growing up years, her parent’s rocky relationship, and her travels with her mother, and undying love for her father, that is until he shot her mother, copped a plea and spent two years in prison never admitting to or telling Brenda the truth about her mother’s death. But the piece de resistance came when her father married her mother’s sister. That was it for Brenda.

But “My Brooklyn Hamlet…” ends on appositive note for Brenda, her family and the audience and becomes a life’s lesson in forgiveness, love and acceptance.

Brenda Adelman likes to compare her life to Shakespeare’s “Hamlet,” because — let’s face it — that’s classier than comparing it to an episode of the “Jerry Springer Show.”

Yet both could be accurate. Adelman’s father killed her mother in circumstances that were never clear, then married her aunt. If that weren’t enough, Adelman never got the answers she needed about the night her mother died from her dad before his own death.

This was obviously dark and depressing for Adelman, though her engrossing one-woman show sports a lighter touch. She imitates both her parents with accents and mannerisms — and she’s smart enough to see what was funny about each of them.

Her father seems the stereotypical macho ladies man, but her mother emerges as a true character — a woman who read Shakespeare to her young daughter at bedtime, and imparted such wisdom as life’s like a tube of paint, so grab it and push every bit out.

The most intriguing part of Adelman’s show is how she weaves in key phrases from Shakespeare’s “Hamlet.” By all rights, this should be over-the-top or feel like false emotion. But Adelman sprinkles her phrases judiciously — “what a piece of work is man,” “to sleep, perchance to dream” — and more than once they sent a chill down my spine in the context of her tale.

The crux of her story is how she learned to forgive. (Adelman presents the show to groups such as domestic-violence coalitions, churches and Jewish centers). Yet that’s where the show came up short. She spends a lot of time on the intriguing journey that led to her mother’s death, and its aftermath, but doesn’t give a clear picture of her own emotional healing.

Nevertheless, this is a journey worth taking.

Read the article in the Jewish Chronicle

Brenda Adelman’s one-woman show “My Brooklyn Hamlet” retraces her path to forgiveness and resolution after the tragic death of her mother by her own father’s hand, her parent’s violent on-again and off-again relationship throughout her childhood, and her realization of being used by the man she so often defended after his remarriage to her mother’s own sister. Who needs reality television?

Though painful and hopeful as her story may be, nothing told her tale better than her casually sly grin and raised chin as her recounted her story step by hurtful, bloody step. Mercy and absolution are indeed the end result of this near tragedy.

Best of the fest The Orlando Weekly

Brenda Adelman has a story to tell – and it is totally meshugenah. In 1995, Adelman’s mother was shot dead under mysterious circumstances. The only suspect was her father, a charming womanizer whose turbulent relationship with her mother was a hallmark of Adelman’s childhood. He claimed no memory of what happened, and Adelman (something of a daddy’s girl) initially put her trust in him. Within six months, her father married her mother’s sister and refused to acknowledge what he called “the past.” Even after he was released from prison after serving more than two years for manslaughter, he refused to talk about what really happened. As a result, Adelman spent much of her adult life haunted by self-doubt – unhappy, stressed and angry.

This one-woman show illustrates how intensely family dysfunction impacted Adelman’s perception of the world. She tells her story through dark, wickedly funny anecdotes that are laugh-out-loud hilarious, but also gut-wrenching. Adelman punctuates her narrative sparingly with passages from Hamlet – a daring move, since it places her in danger of moving into cliché territory. But Adelman’s delivery of the Bard’s lines is skillful and emotionally moving, bringing a fresh perspective to the centuries-old words and giving Adelman a way to express true despair without alienating her audience.

Adelman’s story isn’t entirely a tragedy. Despite the resentment she harbored for many years – and the final fuck-you doled out by her father after he died – her story is more of a celebration than a dirge. In addition to documenting some of the darkest moments of her past, she also tells the story of how she dragged herself out of anguish and pieced her life together again.

Adelman’s delivery is full of little imperfections, but somehow her quirks and stumbles are more endearing than annoying, reminding us that this play is based on real life – and like real life, some of its beauty can be found in its imperfections. (60 minutes; Blue Venue; $10) – Erin Sullivan

Check out the full review https://www.orlandoweekly.com/Blogs/archives/2014/05/17/orlando-fringe-review-my-brooklyn-hamlet-a-meshugenah-true-story

Check out page 48-51 for Brenda’s article: DEFINING FORGIVENESS: It’s an Inside Job 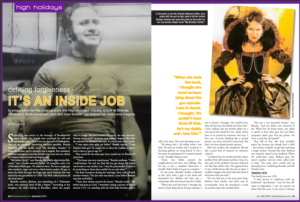